Home » Bunong » The Bunong of Mondulkiri

The Bunong of Mondulkiri

Approximately 60% of people in Mondulkiri province belong to an indigenous group. Most of them are Bunong (54%). Ethnic Khmers make up 35%, Vietnamese 2% and Cham 3% of the population in Mondulkiri.

All the jungle guides and all of the mahouts at the Mondulkiri Project are Bunong. When any works needs to be done at our sanctuary we employ Bunong from the villages closest to the sanctuary.

The Bunong are subsistence farmers living in small village communities in the forests of Mondulkiri. Traditionally, everything the Bunong need to survive comes from the forest and their modest farms located in small areas within the forest.

Most Bunong families practice swidden or shifting cultivation as their main form of agriculture.  Forest is cleared and burned to establish agricultural land which is cultivated with hill rice, intercropped with a wide variety of vegetables. In the past, new forest was cleared and previously farmed fields were left fallow until the forest cover regrew, the soil regained its fertility and the plots could be used again.

Today, Bunong people no longer clear new forest to make small farms. Almost every household is aware that it is forbidden by Cambodian law to cut new forest. Normally, the Bunong return to their old fields, which they left fallow for five to nine years and use the same fields for three to five years, depending on the soil quality.

According to Bunong belief, some actions in the forest are governed by religious rules that keep man and nature in balance, avoiding widespread habitat destruction.

The Bunong believe that nature is populated by spirits, both good and bad, and that these must be obeyed and appeased. No spirits are more powerful than those of the Spirit Forests.

Spirit Forests are usually stretches of very dense ever- green forest. A waterfall, a small hillock or a giant tree often signifies the location of such an area.

The close symbiosis between man and nature is remarkable and extends to other forest areas as well. Burial grounds for example, are not to be logged or otherwise exploited.

The Bunong belief system is in itself a locally adapted code of behavior – an efficient form of responsible resource management refined by hundreds of years of first hand experience. It is a system based on respect – the Bunong realize that a healthy forest is essential to their cultural survival. It is part of their identity and part of Cambodia’s spiritual and natural heritage.

When asked who owns the forest, the Bunong answer that the forest is owned by everyone. They lay no claim of individual land tenure, but feel collectively connected to the forest.

The Bunong depend on collecting non-timber forest products to subsidize his livelihood. They collect forest vegetables, wild fruit and honey as well as bamboo or rattan for house construction and liquid tree resin, which they sells to traders in Sen Monorom.

Most Bunong, like other hill tribe communities in the region, practice animism, the belief in natural spirits combined with ancestor worship.

While the Bunong’s collective past is fractured by recent conflict and relocation, some animist beliefs and customs are upheld by almost every family and virtually every aspect of Bunong life is influenced by spiritual beliefs.

What is more, Buddhism in Cambodia has strong roots in animist traditions.

Bunong and the Asian elephant

Central to Bunong culture is the elephant. Cambodia is one of the last countries in Southeast Asia that retains a sizeable population of wild and domestic elephants.

The Bunong have always shared their lives with elephants, which are treated somewhat like members of the family. If an elephant gets sick or is injured, the Bunong will perform a ceremony and it is taboo to eat elephant meat. Prior to the Pol Pot years, almost every village had some elephants and the number of elephants owned by a family indicated their wealth and social status.

When the Khmer Rouge came to power and forced the Bunong to move to Koh Nhek District in the north of Mondulkiri, many elephants were killed by the communists, set free or sold by the Bunong. By the time the Bunong returned to their villages in the 1980s, the number of wild elephants had declined sharply. Furthermore, since conservation efforts were introduced in the mid-1990s, it is forbidden to capture them.

The Bunong are an integral part of Mondulkiri culture, along with the rolling grasslands, the magnificent jungles and some of Cambodia’s last remaining wild elephants and tigers. Clearly, the Bunong’s relationship to their environment and the forest shows that the two are so intimately connected, that one needs the other to survive.

We are an award-winning elephant sanctuary and we protect forests to give elephants in Cambodia a place they can call home.
All Posts »

This great video has been released on the youtube channel of the Mondulkiri Project. It features incredible footage of this unique Cambodian Elephant Sanctuary. Located

How much is a wild elephant worth?

In 1996, Prof Shahid Naeem was part of a team of researchers who set out to value the Earth. Specifically, they were trying to establish

In March of this year COVID-19 started to spread around the world. Cambodia’s borders were closed No tourists were able to visit us. We lost

The Mondulkiri Project elephant sanctuary closed for ten weeks fur to Coronavirus. We have reopened the sanctuary on 1 June 2020 There are no reported

Mondulkiri Province is the largest province in Cambodia.  It is also the most sparsely populated province. It is located to the far east of Cambodia, 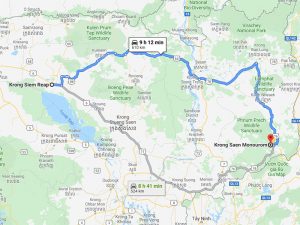 Siem Reap to Sen Monorom via Banlung Virak Buntham now has an express minivan that travels daily at 7.30am from the Siem Reap Bus Station

Complete all the details on the form and we will get back to you within 24 hours to confirm your booking.

If you have any questions, please read our FAQ section before emailing us.